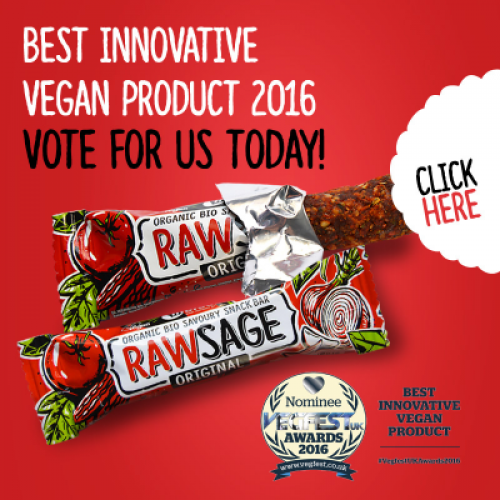 Lifefood has been nominated for “Best Innovative Vegan Product” at the VegfestUK Awards 2016, which celebrate the very best of a vegan lifestyle in the UK.

Lifefood has been nominated for

at the VegfestUK Awards 2016, which celebrate the very best of a vegan lifestyle in the UK.

Rawsage is the first raw vegan savoury snack bar on the market. The name Rawsage came from the combination of raw and sausage. With its satisfying texture and intense flavours, it will appeal to everyone. Made with organically grown vegetables, nuts and seasoned with a mix of herbs and spices, this delicious snack demonstrates a new approach in the production of raw vegan ORGANIC snacks.

Running since 2007, the awards are the highlight of the year for many vegan businesses, organisations, projects and people, with tens of thousands of votes cast each year. Small vegan businesses and charities especially benefit from the marketing and prestige the awards create, and they have become a much loved and much valued part of the UK vegan community.

The VegfestUK organisers added, “With over half a million people identifying as vegan, and half a million veggies actively seeking vegan options, there have been a huge explosion in vegan products, projects and organisations. The VegfestUK Awards 2016 reflect both the quality and diversity within the vegan market today, and to be nominated for an award in 2016 is a huge achievement in itself. We expect the “Best Innovative Vegan Product” category to be hugely contested.”