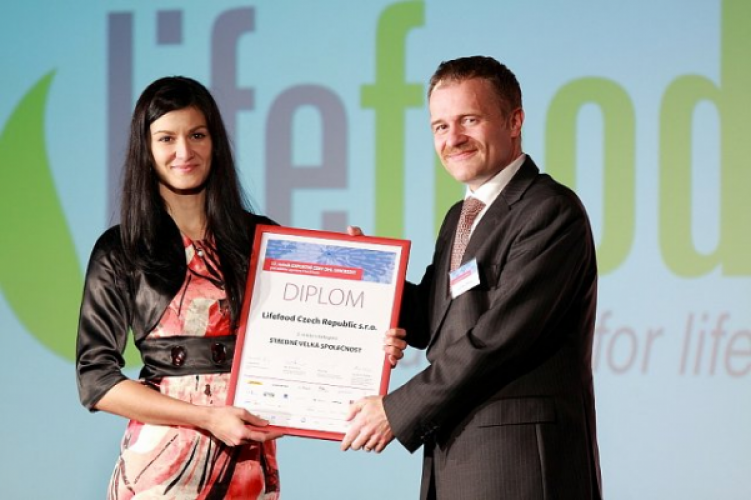 Success on twenty foreign markets, international growth in exports by almost one hundred percent, and a turnover exceeding 4.5 million EUR – those are the parameters that boosted Lifefood up to the silver ranking in the “Medium-sized company” category in the 17th annual DHL UniCredit Export Awards.

The Czech manufacturer of 100% raw treats became, however, the only food exporter to receive an award in this prestigious competition. Lifefood specializes on hand-made vegan foods, which are processed at temperatures not exceeding 42 °C. Due to its volume of production, breadth of selection and advanced technology, the company is the largest raw food producer in the world.

“We greatly value this award, and see it as a confirmation that we are heading in the right direction. Lifefood arose from a love of food, a respect for life and everything that is alive around us. This philosophy forms the basis for our careful selection of ingredients, strong emphasis on manufacturing quality, as well as our first rate approach to customers. We are pleased that we have been able to work our way into the position of a company whose products can hold their own among the competition on foreign markets,” says Tereza Havrlandová, CEO of Lifefood Czech Republic s.r.o.

The Lifefood story began in 2006 in a small bakery near Prague. Together with her first employee, Tereza Havrlandová redesigned the bakery for drying and organized everything from recipes to production and distribution of goods. Today, Lifefood has almost 130 employees and offices in more than twenty countries, with Germany as its largest customer. The brand has entered most European markets, including the French, Dutch, English, Belgian and Swedish markets, and is now also available in the United Arab Emirates. In 2012, the total volume of exports was 2 million EUR, whereas a year later, the total export value reached 3.7 million EUR (for a total turnover of 4.5 million EUR).

“Export growth was definitely bolstered by the setting up of a system of operating abroad, where cooperation with regional partners in individual countries paid off. Participation in important tradeshows also helped,” stated Zuzana Klačková, sales director of Lifefood Czech Republic s.r.o.

The Lifefood product portfolio includes 100% raw chocolates, energy bars, dehydrated vita flat cakes and crackers, tarts, cookies, vegetable chips, marinated nuts, Rawmeo dessert balls and so-called superfoods, or foods with a high content of health promoting nutrients. “Lifefood’s Foreign customers consist mainly of distributors. Our bestselling product is the Lifebar,” says Zuzana Klačková. Simultaneously she adds: “The reason could also be that we continually strive to remain a step ahead and regularly refresh our product assortment with new flavors. The bars were among the first products that helped build our brand.”

All Lifefood products are BIO certified, vegan, gluten free, lactose free, and without chemicals and fillers. The products and individual ingredients strictly comply with the principles of raw food – are not heat processed above 42 °C, so as to preserve all of their nutrients and stay fresh thanks to the packaging technology specially developed by Lifefood for manufacturing purposes.

One hundred companies made it to final phase of this year's DHL UniCredit Export Award. In the category of "medium-sized companies" Lifefood surpassed 51 companies across the spectrum. The competition was open to exporters established before January 1, 2012 who fulfilled the conditions of a maximum of 250 employees, a turnover of up to 53 million EUR and an export volume in 2012 of at least 3500 EUR. The fundamental evaluation of the exporters was based on an index calculated as a multiple of annual export growth (2012 and 2013) and the share of exports in sales.

Lifefood has also received awards from consumers and culinary experts. This year, the company also received the jury award for its onion chips in the Consumer Choice competition.